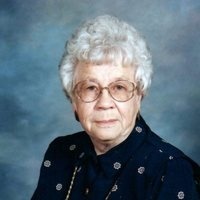 Alice M. Nelson, 91, of Barnesville, passed away on Sunday, December 8, 2019 at ValleyCare and Rehab, Barnesville.

Visitation is Friday from 5-8 PM with a prayer service at 7 PM at Dobmeier Funeral & Cremation Services, Barnesville, MN.

Alice was born on March 19, 1928, to Oscar and Anna (Myhra) Egge in Barnesville, MN.  She attended school in Barnesville, graduating in 1946, and went on to attend Interstate Business College.  She worked at the Fargo Foundry. After having children, Alice stayed home to raise them. Later she worked at American Family Insurance in Barnesville.  On October 16, 1948, Alice was united in marriage to Kermit Nelson at Gran Lutheran Church, Skree Township, Clay County, Minnesota. The couple made their home in Humbolt Township, Clay County, Minnesota, where they farmed and raised their family. Kermit passed away in 2009.

During her life, Alice enjoyed bowling, flower gardening, craft work, and needle work. She was active in the Clay County Fair and served as superintendent of the needle crafts for more than twenty years. She was a member of Gran Lutheran Church and active in her circle.  She enjoyed working at the Western Minnesota Steam Threshers Reunion in the Gran food stand and listening to the music in Nelson Hall at Rollag.Traveling and being with family and friends were always highlights to Alice.

Preceding Alice in death are her parents; her husband, Kermit; and one sister-in-law, Barbara Tenneson.