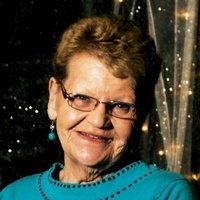 Anita O. Ray, 71, of Moorhead, MN, passed away on Sunday, May 27, 2018 at Sanford Health in Fargo, ND.
A service to honor her life will be held  on June 10, 2018 at the Carriage House Apartments in Moorhead, MN at 1:00 PM.
Anita Olive Heimark was born on September 27, 1946 to Morgan and Adeline Heimark. Anita grew up in the Pelican Rapids, MN. She was married in 1965 and to this union two children were born; Cindy and Jeff. Anita married Larry Ray in 1992. Anita worked and managed several truck stops throughout her life, including truck stops in: Post Falls, ID, Williston, ND, Tucson, AZ and Moorhead, MN.
She will be remembered as a spunky, jazzy woman, who was never short on laughter.  Her grandchildren were the utmost important to her.  She also liked to dance.  She spent hours upon hours in her flower gardens, especially while living in Michigan.  These gardens were her way of paying tribute to family and loved ones who lost their life.  Her gardens were even featured in a Better Homes and Garden edition.
Anita is survived by her children, Cindy (Bob Jungels) See of Sauk Rapids, MN and Jeff (RoseAnn) Schaefer of Allegan, MI; 7 grandchildren, Ashley (Isaac) Froemming, Joshua See and Katherine See, Christopher Schaefer, Terry Steinbeck, Patrick Steinbeck and Jesse Steinbeck. She is also survived by three brothers, Melvin (Annette) of Moorhead, Morgan (Jenny) of Sabin, MN and Harvey of Hunter, ND and one sister, Sandy Abraham of Vero Beach, FL and many nieces and nephews.
Anita is preceded in death by her parents; her husband Lawrence in 2017; 4 brothers, Ardean, Harold, Roger and Lawrence; and 5 sisters, Marjorie, Betty, Deloris, Joyce and an infant sister.
To order memorial trees or send flowers to the family in memory of Anita O. Ray, please visit our flower store.