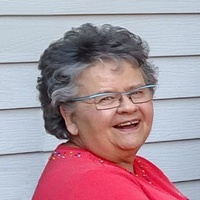 Visitation will be from noon to 2 pm on Friday at the church.

Annette Marie was born on August 17, 1947 in Moorhead, MN to Larry and Alice (Hovelsrud) Esbenson.  She grew up with her family in Comstock, MN.  She attended school in Comstock through 6th grade and then finished her education in Barnesville, graduating in 1965.  Later that summer, Annette married Melvin Arland Heimark on August 20, 1965.  They lived in Sabin for many decades.  During these years, Annette worked at American Linen, JC Penney’s and Border State Electric, until retiring in 2012.

Their home in Sabin was bought out for flood control and they moved to Moorhead.  She and Melvin enjoyed many summers at Ebert’s Resort on Star Lake in rural Pelican Rapids, MN.  She also enjoyed playing cards and dice with friends and family.  She was a member of Trinity Lutheran Church in Sabin, MN.

She was preceded in death by her son, Kip Heimark, and her parents.