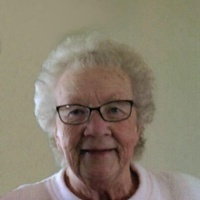 Memorial service will be 7:00 PM, Thursday, August 9, 2018 at St. James United Church of Christ in Barnesville, MN with Rev. Frank Picard officiating.  Visitation will be from 5-7 PM on Thursday.
Arlene Mae Wagner was born on July 26, 1939 to Orville Elmer and Anna Mae (Wrobel) Wagner in Barnesville, MN.  She attended school and graduated from Barnesville High School in 1957.  During her younger years, she worked at Emery’s Café.
She was united in marriage to Ronald Edwin Ernst on December 20, 1957 at St. James United Church of Christ Church in Barnesville.  They made their home in Barnesville.  She stayed at home raising her young children; Ronald had a debilitating stroke at age 40 and Arlene found herself raising three young children and supporting the household.  During those years, Arlene  was a waitress at the Wagon Wheel Restaurant in Barnesville, and at Sher’s Kitchen in Moorhead, MN for several years, and cooked at the Barnesville Care Center for about 15 years.  Before retiring, she worked at Barnesville Grocery cooking in the deli.

Arlene was a feisty lady with strong opinions. She loved her family and loved spending time with them. She showed her love through her cooking and hosting family in her home. She enjoyed watching sports and especially the Minnesota Twins. She had many interests including crocheting her famous baby afghans and potholders, which she won several awards. She was a member of St James Church in Barnesville and participated for several years in a birthday club with friends. One of her favorite pastimes was going to the Pool Hall to visit with friends, do a few pull tabs, and occasional trips to the casino.

Arlene was preceded in death by husband Ronald in 1990; her parents; father and mother-in-law, Edwin and Minnie Ernst; and brothers-in-law Ray Hegdahl, Earl Erickson, and Loren (Karen) Ernst.