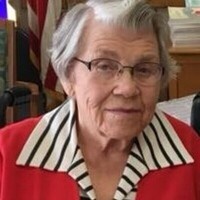 Arlene Carol was born September 25, 1927, at her grandfather's home in Tansem Township of Clay County, the daughter of Albert C. and Hilda T. (Skogen) Bekkerus. The family was of Norwegian heritage. She attended grade school in Wilkin County and graduated from Barnesville High School in 1947. Arlene worked for various families in the area.

On November 15, 1947, she married Orrie E. Gilbertson at the Barnesville Assembly of God Church. The couple resided and farmed near Rollag before moving into Pelican Rapids where Arlene resided until her passing.

She served as a Women's Leader and Secretary at the Assembly of God where she was a member. Arlene was also a faithful Sunday School teacher.

Preceding her in death were her husband, Orrie; parents; sister, Claudia; and granddaughter, RuthAnne.

Visitation will be Thursday from 5-7 PM at Dobmeier Funeral Home in Barnesville. To order memorial trees or send flowers to the family in memory of Arlene Carol Gilbertson, please visit our flower store.