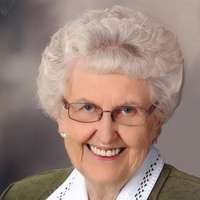 Memorial service will be held 11:00 AM, Saturday, November 14, 2020 at St. John's Lutheran Church in Barnesville with Rev. Gary Rehborg officiating. Visitation will be Saturday from 9-11 AM at St. John's Lutheran Church. A time of food and fellowship will be hosted by the family at the Pitchfork following the funeral service. Burial will follow in Christ Lutheran Cemetery, Mitchell Township.

Arlene Ann Onchuck was born August 29, 1935, to Peter and Margaret (Lenz) Onchuck near Hankinson, ND. She attended country school as a youngster and graduated from Wahpeton High School in 1952. She then attended North Dakota State School of Science and graduated from the medical secretary program. Arlene went to work at the Fargo Clinic until her marriage to Merlin Fenske in October 1954. Merlin passed away in a rollover tractor accident in January 1958. Following Merlin's passing Arlene started working at the Red River Valley Clinic in Wahpeton for several years. During these years she travelled with friends to many locations including Mexico, Colorado, and the World's Fair in Seattle. She often said those were some of the best years of her life!

Arlene met Louis Krueger in Fargo, ND at the Singleaires Club. Even though Lou didn't have a romantic proposal, she said yes and they were married October 23,1965, at Immanuel Lutheran Church in Wahpeton, ND. They made their home south of Barnesville, MN and worked side by side on the farm until they moved to town in 2010. Arlene always wanted to be a nurse, so took classes and became a Home Health Aide for Clay and Wilkin Counties for many years along with working on the farm.

Arlene was a member of Christ Lutheran Church from the time she moved to the farm until the church closed in 2002. She then became a member of St. John's Lutheran in Barnesville. Arlene taught young adult Sunday School at Christ Lutheran for many years and was active in the Lutheran Women's Missionary League, serving in several capacities, including Recording Secretary of the MN North district. Despite several tragic events in her life she remained faithful and wasn't afraid to share the good news of Jesus with others.

Arlene was a good listener, a generous and thoughtful person, always putting the needs of others ahead of her own. She didn't really like to cook but she was good at it. She had a big garden every year and could be found in the kitchen in August canning tomatoes, peaches, and sweet corn. She was known for her dill pickles and her massive salt and pepper shaker collection! She enjoyed shopping, antiques, and quilting. She loved being a grandma and eating a good hot fudge sundae!

Arlene and Lou spent 19 winters in Mesa, Arizona and made many dear friends. Once you visited with Arlene you were no longer a stranger as she had the gift of gab! She moved into Twin Town Villa in Breckenridge, MN in June of 2017.

Arlene is preceded in death by her parents; husband Merlin Fenske; husband Louis Krueger in October 2017; her brothers and sisters-in-law: Hans and Maria Lenz, Gerald and Edna Onchuck, Willard and Mavis Onchuck, Richard and Faith Krueger and an infant daughter Betsy Ann in 1966.