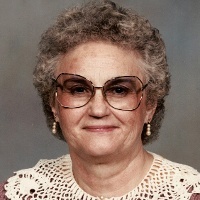 Arlene Maybelle Flaten was born on February 21, 1932 to Axel and Mildred (Aakre) Flaten in Moorhead, MN.  She grew up in Barnesville and graduated from Barnesville High School.  During her school years, she was a majorette.  Following high school, she was married to Clarence Scheffler and to this union six children were born: Bruce, Douglas, Pam, Vicki, Joel, and Lyle.  They started out living in town, before moving to a farmstead southwest of Barnesville.

She was a member of Our Savior’s Lutheran Church, church circle, VFW Auxiliary and Bowling League; just to name a few.  After the boys moved away, she would write the boys a letter almost every day.  She enjoyed getting the family together for the holidays.  Every morning, she would prepare a list of the daily tasks and cross them off as she completed them.  Later in her life, she moved to an apartment in Moorhead, then Eventide Fairmont, and for the last five years at the Eventide Nursing Home.

To order memorial trees or send flowers to the family in memory of Arlene M. Scheffler, please visit our flower store.