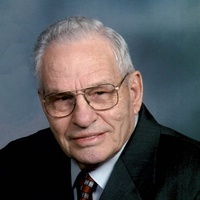 Visitation will be for one hour prior to the funeral service at the church.

Arnold William Korbel was born on January 7, 1927 to William and Gertrude (Gudarian) Korbel in Barnesville, MN, the youngest of three children. He attended country school through the 8th grade and then went on to graduate from Barnesville High School in 1945. He began farming with his father south of Barnesville.

On April 13, 1948, he married Ardell Ramse at Assumption Catholic Church. They lived on the family farm for many years, until moving into Barnesville in 1974. He farmed all of his life and his farm was his happy place. He retired from farming in 1990. For 18 years, from 1988-2006, he and Ardell enjoyed wintering in Texas.

He was a member of the Assumption Catholic Church, working many years in the Rollag Steam Threshers food stand for the church. He was a lifelong member of the Knights of Columbus, where he served as Grand Knight in 1960-1961, and also served as financial secretary. For over 15 years, he was active in 4-H, and managed the Hobo's Card Club from 1979-2002. Arnold enjoyed playing cards, hunting, fishing, gardening, sports of all kinds, especially softball and bowling, growing the earliest potatoes in town each year, making horseradish, and teasing and joking with his grandchildren.

Arnold was a strong, kind, hardworking, supportive, funny, family man.  His faith and knowledge were the foundation of his family.

Arnold was preceded in death by his parents, and sister Elaine Lantz, brother Melvin Korbel.

In lieu of flowers, memorials will be designated to St. Mary's Cemetery Fund for future upkeep. Arnold's Memorial Folder
To order memorial trees or send flowers to the family in memory of Arnold Korbel, please visit our flower store.