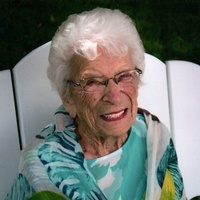 Mass of Christian Burial will be 11:00 AM, Monday, March 12, 2018 at Assumption Catholic Church in Barnesville, MN with Father Gary LaMoine presiding. Burial will be at St. Mary's Catholic Cemetery in the spring.

Visitation will be 5-8 PM, Sunday, March 11, 2018 with a Prayer Service at 7:00 PM at Dobmeier Funeral Home in Barnesville, MN.  Visitation will continue for one hour prior to the funeral service on Monday.

Berneice Theresa Lewis was born August 23, 1918 to Ed and Dora (Nicklay) Mulcahy in Barnesville, MN.  She was the oldest of 10 children and attended school through the eighth grade in Barnesville.  Being the oldest child, she was her dad’s helper and the love for horses began at an early age.

Berneice married Emil Mueller in St. Paul, MN on June 24, 1939 and of that union a son, Patrick, was born.  She worked at several businesses in Barnesville, including a cook at the old Eagle Café and as a bookkeeper for the Barnesville Coop Creamery.  She later married Orris Lewis and they lived in Fergus Falls, Sioux Falls, SD and later in Detroit Lakes and Barnesville.  She also worked at the Pelican Rapids Turkey Plant and as a demonstrator at Sam’s Club in Fargo until the age of 89 years.  She later moved to Detroit Lakes to be near her son.  Berneice suffered a stroke on Sunday, January 21, 2018.

She was preceded in death by her husband Orris Lewis, her sister, Marge Stubstad; and brother, Donald Mulcahy; daughters-in-law: Loretta and Hilary; and great-grandchild, David Foley.