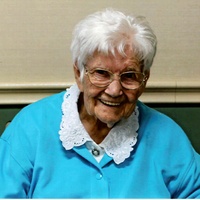 Funeral services will be 11:00 AM, Thursday, October 17, 2019 at St. John’s Lutheran Church in Barnesville, MN with Rev. Thomas Eaves officiating. Burial will be at Mitchell County Cemetery near Wolverton, MN.

Visitation will be 5-7 PM, Wednesday, October 16, 2019 at Dobmeier Funeral and Cremation Service in Barnesville with a Prayer Service at 7:00 PM. Visitation will continue one hour prior the funeral service on Thursday.

Betsey Charlotte Hatlestad was born September 13, 1924 to Elmer and Bertha (Buseth) Hatlestad in Toronto, SD. Betsey was baptized on November 2, 1924 at Hauge Lutheran Church. She grew up and attended country school in McHenry County, ND. On October 19, 1942, Betsey was united in marriage to George J. Bohner in Warren, MN. They lived near Voltaire, ND until moving with their 2 children to a farm in the Wolverton area. In Wolverton, they farmed and raised dairy cattle and had an additional 6 children.   During the time living near Wolverton she was a member of Christ Lutheran Church. When the churches merged, she transferred to St. John’s Lutheran Church and was confirmed March 15, 1953 by Pastor Alfred H. Beck. In 1978, Betsey and George moved from the farm and built a home in Barnesville. George passed away on March 31, 1996.

Betsey enjoyed many years of embroidery, quilting, knitting, plastic canvas, sewing and mending clothes for her children. She was a hard worker and an active part of farming with her husband. Always keeping the records together and doing the bookkeeping. There were numerous meals to make and even taking “hot” meals to the fields. She taught Sunday school and was involved with the Ladies’ aid at St. John’s Lutheran Church. She valued family geneaology and had spent countless hours compiling history from four family trees of the Bohner & Hatlestad sides. Many hours were also spent writing letters to family and friends. Always keeping in touch without using a phone or computer. Everything was written down in tablets of the travels George and Betsey had throughout their life. They traveled several months during the winter months to the West coast to visit relatives and friends, then settled for winters in their Texas home. She enjoyed crafts and playing bingo while in Texas. Betsey will be remembered for being quiet-natured, a great listener and a dedicated wife and mother.

On August 28, 1999 Betsey married Troy Herrel at St. John’s Lutheran Church in Barnesville. They continued to spend time between Texas, Colorado, and Barnesville. Troy passed away on November 30, 2012. In September of 2013 Betsey moved to Eventide Assisted Living in Moorhead. In May 2017, she entered the Eventide Lutheran Home, and in August of 2017 she moved to Valley Care & Rehab in Barnesville.

Please keep the Bohner family in your thoughts and prayers.