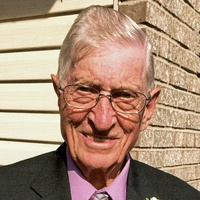 Calvin Boen, 94, of Barnesville, MN, formerly of Battle Lake & Pelican Rapids, MN, died at his home on Wednesday, November 18, 2020, with his loving family caring for him.

Visitation will be from 10 to 12 on Friday at Dobmeier Funeral Home in Barnesville.

Calvin Theodore Boen was born on October 12, 1926, to Carl William and Helen Katherine (Helm) Boen near Rush Lake, Minnesota.  Cal was baptized at St. Leonard's Catholic Church in rural Perham, Minnesota. When Cal was two years old, the family moved to Mahnomen, MN, where he was confirmed in the Missouri Synod Church. He attended school in Norman County, District #17, and also in Mahnomen County, Chief Township, District #71. At the age of 17, Cal gave his heart to the Lord in the Pentecostal Mission Church in Mahnomen. When Cal was 27, he rededicated his life to Christ in June of 1953.

On January 25, 1945, he entered the U.S. Army (Calvary Division) and was stationed in the occupation forces in Germany.

On October 12, 1948, he married Verna Bjerken in Mahnomen. The couple resided and farmed in the Mahnomen area and were the parents of eight children. Cal farmed for 13 years and managed the Cenex Cooperative in Battle Lake, MN, for 13 years. He also owned and operated the Dairy Queen in Pelican Rapids for 22 years. Verna died on September 21, 1985.

On February 14, 1986, Cal married Mildred "Millie" Sillerud at Bethlehem Lutheran Church in Fergus Falls, MN. The couple resided in Pelican Rapids for several years and eventually made a home in Barnesville. They spent several winters in Mesa, Arizona.

Cal was a member of the Calvary Evangelical Free Church in Pelican Rapids, where he had served on the building committee and the church board. He was also a member of the American Legion Post #153 and a life member of the VFW, both in Barnesville. He previously served as a 4-H leader. He attended the Assembly of God Churches in Mahnomen and Fergus Falls and the Missionary Alliance Church in Battle Lake from 1970-1977. Cal taught Sunday school and served as a church Superintendent. His faith is represented through James 1:12 "Blessed is the one who perseveres under trial because, having stood the test, that person will receive the crown of life that the Lord has promised to those who love him."

Cal spent many hours in his vegetable and flower gardens; you name it he grew it! He enjoyed golfing, traveling and fishing. Cal and Millie spent many hours making lefse, canning jellies and pickles and making cookies; all of which they shared generously. Cal had a tremendous amount of love for his lord, his family, and his country.