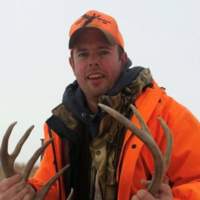 Memorial services will be 11:00 AM, Tuesday, April 26, 2022, at Our Saviors Lutheran Church in Barnesville, MN with Rev. John Andrews officiating.

Visitation will be from 5-8 PM, Monday, April 25 at Dobmeier Funeral Home in Barnesville.

Chad William was born on March 23, 1970, to Wayne and Carol (Funkhouser) Brendefur in Fergus Falls, MN. He was baptized and confirmed at Vukku Lutheran Church in Foxhome, MN. Chad attended the Campbell-Tintah School District graduating in 1988. He then went on to attend Moorhead State University in 1994 with a degree in Energy Management. He then went to work for Lake Region Electric in Pelican Rapids, MN for many years. He also worked at Scheels in Fargo and for his dad at Brendefur Electric.

On May 21, 2004, Chad was united in marriage to Angela Odden at Faith Lutheran Church in West Fargo, ND. They started out their married life in Barnesville and have lived there ever since.

Chad loved to hunt and fish. He enjoyed hunting deer, pheasants, ducks, and geese. Over the years, Chad had a green thumb and liked his vegetable garden. Chad also enjoyed grilling and cooking his bounty. Chad and Luke's fun time together was driving and finding places to take photos of nature, wildlife, and farms. Family trips together to Duluth have special memories.

Chad was preceded in death by his mother-in-law, Dianne Odden and his grandparents.

A recording of the funeral service will be posted on this page later this afternoon. To order memorial trees or send flowers to the family in memory of Chad Brendefur, please visit our flower store.