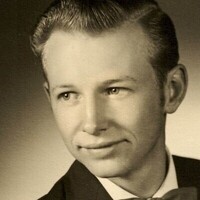 Curtis M. Nelson, 82, of Barnesville, MN died on Thursday, December 31, 2020 at the Hawley Senior Living Center, Hawley, MN under the care of Hospice of the Red River Valley.

A Celebration of Life for Curtis will be at Dobmeier Funeral Home on Thursday, July 29, 2021 at 6:00 PM. At Curtis's request, the service will be lead by Duane Morey, and then everyone is invited for a luncheon at the American Legion Club in Barnesville.Cathy Erickson, accordion player and musician will share music at the service and also at the American Legion Club. Inurnment of Curtis cremains will be at Gran Lutheran Cemetery, Rollag, MN on Friday, July 30, at 10 AM.

Curtis "Curt" M. Nelson was born on December 30, 1938 to Bennie O. and Agnes M. (Strandlien) Nelson in Barnesville, MN. He attended school and grew to manhood in the Barnesville area, graduating from Barnesville High School in 1957. He then went on to attend Wahpeton Science School for one year. From 1960 to 1966 he served as an airman first class in the Air National Guard. Curt married Delores Gruebele on March 21, 1964 in Gran Lutheran Church, Rollag. He worked at auto body shops in Pelican Rapids and Hawley. He also worked many campaigns with American Crystal Sugar in Moorhead. He started farming with his brother Kermit in 1955 and continued farming for many decades.One of his greatest accomplishments was keeping the family farm and having a show place farmstead.

He was preceded in death by his parents, one brother Kermit, one sister Barbara Tenneson.