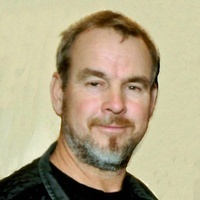 Visitation will be from 5-8 PM, Friday, June 8 at St. James United Church of Christ with a Prayer Service at 7:00 PM.  Visitation will continue one hour prior to the service on Saturday.

Dale Allen Braton was born on December 6, 1957 to Ronald Wayne and Beverly Sharon (McEvers) Braton in Fargo, ND.  He was baptized and confirmed at St. James United Church of Christ.  He grew up in rural Barnesville and attended school in Barnesville graduating in 1975.  He was affectionately known as “Gunther.”

Dale worked hard throughout his life primarily in concrete industry, at Kost Brothers, FM Asphalt Aggregate and currently employed by OPP Construction of Fargo where he was known as “Pig” by his work family.  He married Kay Swan on April 26, 1986 at St. James.  They made their home in Barnesville where they raised their family.

Dale enjoyed playing cards, (especially pinochle) dice, darts, pool, and like to play for wager.  He was very competitive.  He enjoyed his Harley Davidson and biker events.  He liked taking a trip to the casino including Las Vegas.  He was a NASCAR fan, even when his driver (#48 Jimmie Johnson) wasn’t doing well.  He was a rock and roll fan, and enjoyed Moondance Jam for many years.  He had a taste for Schmidt beer.  He will be remembered for having an unusual and dry sense of humor and liked to make people laugh.    Dale was always willing to lend a hand and looked out for others.

Dale was preceded in death by his father Ron; brothers-in-law, Bill Dirkes and Tom Stanton; and his grandparents, Sam and Gladys Braton and Stephen and Myrtle McEvers; and aunts and uncles.

You are encouraged if you are able to ride your motorcycle and wear your Harley Davidson clothing for Dale’s service.