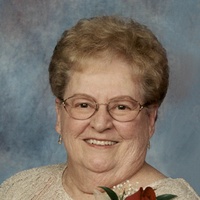 Darlene Geneva Quinnild was born in Fargo, North Dakota on September 24, 1926, to Henry and Dagny Quinnild and was raised on a farm north and west of Comstock, MN. She attended elementary and high school at District #69 in Comstock, graduating in May of 1945. After high school Darlene was employed at Moorhead Jr. High school and later at Gambles in Moorhead. In November of 1955, she moved to Portland, Oregon and was employed with the State of Oregon for a short time. In March of 1956, she went to work for Frigidaire Corporation until November of 1958.

On August 29, 1958, Darlene was united in marriage to Sgt. LeRoy Ladehoff of the USAF in St. James Lutheran Church in Portland, Oregon. November of 1958, the couple had their first military transfer from Portland to Chanute AFB near Rantoul, Illinois. The following August they were transferred to Sheppard AFB near Wichita Falls, Texas. In August of 1961, Darlene went to work in the Supply Department on the base. In May of 1962, Darlene sailed first class on the President Hoover to meet up with her husband who had been transferred Okinawa. In November of 1964, they returned to the mainland and transferred to Lockbourne AFB near Columbus, Ohio. In January of 1968, LeRoy retired from the Air Force. In June they moved to Phoenix, Arizona. Darlene worked at Indian Health Service for 18 years, retiring October 25, 1986. LeRoy died March 20, 1991.

On May 29, 2001, Darlene married Leslie "Bud" Hoppe at the Stave Norwegian Church in Moorhead, MN. They lived in rural Sabin during the summers and wintered in Phoenix. Leslie and Darlene moved into Golden Manor Assisted Living in Barnesville in July of 2013. In July of 2015, Darlene moved into ValleyCare and Rehab also in Barnesville where she lived until the time of her death. Bud passed away in April of 2016.

Memorial Services will be 11:00 am, on Saturday, February 27, 2021 at Dobmeier Funeral Home in Barnesville.  Burial of Darlene's cremains will be in Elmwood Cemetery, Sabin, MN in the spring. The service will also be live streamed and recorded for those who are not able to be here at this time.

Visitation will be for one hour prior to the service on Saturday.

Due to COVID-19 limitations and restrictions Darlene’s service will be livestream and recorded for those who aren’t present. To watch the livestream go to the bottom of this page and it will begin at 11 AM, otherwise, if you wish to watch it later it will become available after 2 PM in the recorded format also on the bottom of this page. Please feel free to sign the online guestbook so the family knows you were able to join them for her service.

While maintaining social distancing guidelines, we are now able to accommodate gatherings while abiding to a 50% capacity at the facility. The use of face masks by attendees is required at indoor events, and we will continue taking the necessary steps to keep your families safe. Expressions of sympathy during this time can be left on the condolences page available on the obituary portion on our website.