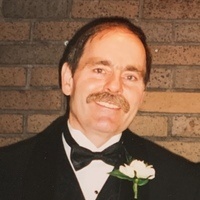 David Askegard, 73, of Barnesville, MN died surrounded by his family on Sunday, November 3, 2019 at the VA Hospital in Fargo, ND.

Visitation will be from 5-8 PM, Friday, November 8, at Dobmeier Funeral Home in Barnesville with a Prayer Service at 7:00 PM.  Visitation will continue on Saturday from 4-5 at the church.

Memorial Services will be 5:00 PM, Saturday, November 9, 2019 at St. James United Church of Christ in Barnesville, MN with Rev. Frank Picard officiating.  Military Honors will be handled by the Honor Guard of the American Legion and VFW Posts of Barnesville.

David Guy Askegard was born on December 11, 1945 in Fargo, ND to Rolfe and Gertrude (Shulstad) Askegard.  He grew up on the family farm in Comstock, MN.  David attended grade school in Comstock and graduated from Barnesville High School in 1964.  Upon graduation, he enlisted in the US Navy serving his military duty from 1964 to 1968.  After enlistment, he worked at Control Data in Minneapolis, then returned to the family farm, also working at ORD Mobile Corporation in Pelican Rapids, MN and continued farming until 1986.  David went to work at ABC Seamless in Fargo from 1986 until his retirement in 2018.

On May 12, 1972, David and Robin Opsahl were united in marriage at St. James United Church of Christ in Barnesville, MN.  To this union three children were born, Brandy, Paul, and Scott.

As Grandpa, David was so fond of his grandchildren, getting right down and playing with them, going to the park, and last, but not least, playing music and having fun with them.  It hurt him immensely when he was no longer able to do this.

David had a love for any type of music and a highlight of his year…dancing at the ABC Christmas Party.  His hobbies included working on electronics of any kind.  David was very knowledgeable in being able to tackle any task and fix just about anything.

In February of 2018, David was diagnosed and started fighting a very painful battle with cancer.

David was preceded in death by his parents, Rolfe and Gertrude; his step-mother Gladys; and mother and father-in-law, Arthur and Betty Opsahl.

David’s family would like to express gratitude to many including: The Mayo Clinic, Sanford Roger Maris Cancer Center, VA Hospital/CLC Hospice, and the many family and friends who helped David along his final journey.