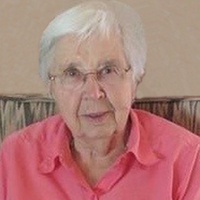 Delene Adele Ellenson was born Aug. 3, 1930 on a farm near Grandin, N.D., to Oscar and Anne (Regier) Ellenson. She arrived shortly after her twin sister, Delores. Delene grew up on farms there and in the Harwood area, later boarding in Moorhead with Delores to attend Moorhead State Teachers College High School, where they graduated in 1948. After high school, Delene worked at the North Dakota Children's Home in Fargo.

On March 26, 1955, Delene married John Lyman at the Lutheran church parsonage in Harwood. The couple met through Delene's brother Harlan and John's sister Verna, who were married a few years earlier. Delene and John farmed near Willow City, N.D. for five years before moving to the West Fargo area for about nine years. They purchased a farm east of Barnesville in 1969, where they lived for 36 years until moving into town.

An introvert who loved her peace and quiet, Delene enjoyed baking bread, working in her flower beds, doing the crossword, and taking walks, especially at her farm. She was an avid reader and loved getting a big box of books that were passed around the family, each reader initialing the cover so they knew who read what. She looked forward to receiving her copy of the Fargo Forum each day. Her grandchildren will remember that she always had gum and Cass-Clay vanilla ice cream with Hershey's syrup. Family picnics always welcomed a big batch of her potato salad or scalloped potatoes.

She was proud of the dozens of quilts she made up in her sewing room for Lutheran World Relief through Our Savior's, knowing they would bring comfort to someone across the world.

Delene was preceded in death by her parents,husband John in 2012,brother and sister-in-law Harlan and Verna Ellenson, sister-in-law Lillian Ellenson, and brother-in-law Richard McMahan.

A graveside service is being scheduled at City Cemetery.

To order memorial trees or send flowers to the family in memory of Delene A Lyman, please visit our flower store.