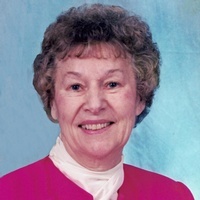 Funeral Services will be held on Friday, April 20, 2018 at 11:00 AM at the Dobmeier Funeral Home Chapel, Barnesville, MN with Pastor Darrel Lindensmith officiating. A visitation will be held one hour prior to the funeral service. Burial will be at City Cemetery in Barnesville.

Delores Ardell Miller was born on March 31, 1926 to Raymond and Leta Pearl (Baumgartner) Miller in rural Rothsay, MN.  At the age of 5 years old, Delores went to live with her Grandpa and Grandma Baumgartner of Rothsay, MN.  She was to help grandma in the home, but Grandpa saw a good worker and had help herding the cattle.  She attended elementary school across the road from the farm.  Every morning he walked her to school and again picked her up when school was over.  After the 8th grade, she attended Rothsay High School until she finished there in 1942.  She later went to Barnesville High School, because she wanted to learn typing and shorthand.  She graduated in June of 1943.  She then went onto Dakota Business College in Fargo, ND where she graduated in 1946.  She worked for her room and board while attending college.  She worked for the Kobe family, helping care for their four children.  The family attended religious meetings in Fargo and Delores joined the Seventh Day Adventist Church.  She worked for The Store Without a Name for a short while and then decided to go to college in Lincoln, Nebraska.  She attended one year of college before Mr. Harold Roll came from Kansas City, Missouri looking for a secretary. Delores accepted a position from him and she moved to Kansas City, MO in 1951.  She worked for him for 5 years, before relocating to Lansing, MI, to continue working for Mr. Roll.  In 1957, Delores moved to Glendale, California and accepted a call at the Southern California Conference of the Seventh Day Adventist Church.  She continued working for the conference for 36 years as a legal secretary until she was 74 years old, retiring in 1993.

During those years in California, Delores was married to Dean Griffith on October 22, 1961 at the Chapel of the Good Shepherd in Glendale.  They lived in Glendale for many years.  After 34 years of marriage, Dean passed away.  They made a wonderful couple and had a good life together.  For the next five years, Delores lived alone in California before moving to Mesa, AZ to be closer to her sister Phyllis.  She met Ernie Rueb and they were married on September 9, 2001.  They wintered in Glendale, CA, and Arizona. They spent their summers in Minnesota, where they built a home in Barnesville in 2006.  In 2012, they stayed in Barnesville permanently.  Delores and Ernie lived in at the Golden Manor Assisted Living for two years and then moved to ValleyCare and Rehab in June of 2015.  Delores loved writing, collecting recipes and her church.

Delores was preceded in death by her parents, her first husband Bill Griffith, and stepson Dean Griffith. Delores 's Memorial Folder
To order memorial trees or send flowers to the family in memory of Delores A. Rueb, please visit our flower store.