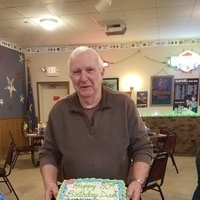 Del was born February 14, 1939 in Barnesville, MN to Russell and Etta (Cook) Noyes. He graduated from Barnesville High school in 1956. Upon graduation from high school, he worked construction for a time and joined the Minnesota National Guard. After serving on active duty at Fort Ord, California, he became a full-time employee of the National Guard as a clerk. Other positions he held were as a cafeteria worker for the Moorhead Public Schools and as a mechanic for his father’s repair shop in Barnesville.

Del married Clarice Egge on November 22, 1958; they had three children and later divorced.

Del was a smart and hard worker.  If he couldn’t figure how to do something one way, another way would soon be found. He began working on the family farm in Elmwood Township at a very early age. One of his first jobs as a youngster was driving a grain truck from the field to the farmyard during harvest. He was not very big at the time and could not see over the steering wheel without kneeling on the truck seat. He was unable to push the gas pedal and steer at the same time, so with the help of a younger sibling sitting on the floor of the truck operating foot pedals, the grain was safely delivered to the farmyard. Thus began his love of driving truck and as such was an over the road trucker for many years. He lived in Montana, Missouri, and Iowa at times—ever following his employer’s location.

Del enjoyed doing a variety of activities—a good mechanic able to fix most anything. He helped out whomever and where ever needed. In later years, some of his favorite activities were, golf, especially with three younger brothers as playing partners, watching and talking sports, and visiting with family and friends over a cup of coffee. The Minnesota Twins/Vikings and NDSU Bison were favorite subjects. Of particular enjoyment was the “coffee group” at the Eagles Café in Barnesville. Most of the world’s problems were solved within that group. Del was a private person and did not talk much about himself. But he always wanted to know how “you” were doing. Del enjoyed visiting with special friend, Brad Holter.

Del was a good guy.

The family wishes to express a heartfelt thank you to Marge Grewatz for her loving care during Del’s illness.  Also, to Brad Holter for his friendship, care, many chats, and numerous trips to Fergus Falls for radiation and chemotherapy treatment.

To order memorial trees or send flowers to the family in memory of Delrey "Del" Noyes, please visit our flower store.