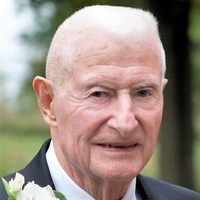 Donald Wayne Anderson was born at home in rural Clay County on May 23, 1934 to Amy (Horkman) and Orland Anderson. He was baptized and Confirmed in Rollag Lutheran Church. He attended District #39 in first grade. When the family moved to our present home in Tansem Township, he attended country school District #77 for grades 2 – 8. He attended Barnesville high school for grades 9 – 12. In order to attend high school in Barnesville, he (and brothers Klennes & Vernon) boarded with Mrs. Ole Anderson in town.

Don was an outstanding athlete – a co-captain of the football team in high school and college, named an All State Football player, played Legion baseball against Roger Maris and later played with the Red Birds. He had letters of recruitment from Harvard and from the University of Minnesota, but he never wanted to be far from Rollag, so attended and graduated from Moorhead State University in 1956, with a Bachelor of Science Degree in Education. He later earned a Masters of Education Degree plus many additional credits from the University of Minnesota. He taught briefly in Fargo before enlisting in the U.S. Army. He later taught in Frazee (teaching science & coaching) for 2 years, before moving to Minneapolis in 1961. From 1962 - 1988 he taught Physical Education in the Minneapolis School District.

In spite of his academic credentials, his favorite job was working summers and post-teaching-retirement years with Barrett Moving Company in Eden Prairie. He told the “Boys in Blue” that he “comes here for the atmosphere, not the paycheck.” He specialized in packing, including moves for Christie’s Auction House in New York, the Minneapolis Institute of Arts and the Walker Art Center.

Don served in the U.S. Army from 1957-1959, traveling through 14 countries and 22 states. While based in Vicenza, Italy, he was able to ski in the Alps, attend the Brussels World’s Fair, wave at England’s Princess Margaret in her carriage, spend frequent Sundays in Venice, see Amsterdam at tulip time, fire missiles in the Azores, buy a tablecloth for his mother in Mexico, eat Weinerschnitzel in Austria and climb the Eifel Tower as well as the Statue of Liberty.

In 1961 he married Mary Peppel in Barnesville. They lived first in Wayzata and in 1965 moved to New Hope. She died in 1969 and Don became a single parent to Brian (3 years) and Scott (11 months). His dedication to and care of the boys was much admired. In 1971 he married Kay/Karelyn (Hansen) creating a family of 5 which included Kay’s daughter, Nancy. Laura was born several years later. They lived in New Hope until moving back to Don’s home farm in 2005. Don said an older man once told him that life wasn’t worth living without a family and he often quoted that advice. Don loved his family! His hobby was Work and he especially loved these past 14 years living again on his Home Farm.

Don loved his family, teaching and playing with his grandchildren, early morning coffee trips to Barnesville, narrating drives through the country with visitors, and helping and visiting with friends and neighbors. He especially loved sharing about the many people and places he’d known. He was a keen observer with excellent memory, and a clever, well-timed wit. His reserved demeanor disguised a warm heart, and he showed his deep respect and care through lifelong acts of service: helping, fixing, teaching, and demonstrating commitment and responsibility - to family, friends, neighbors, church, and community.

Don fell at Rollag Church in 2011 and his survival was questionable. With strength of will and many prayers he made an amazing recovery. We thank Dr. Owen Thompson and Pete Larson and the staff of Rehab Plus for contributing to these past 8 years. Don passed away at North Memorial Medical Center in Robbinsdale, near our former home in New Hope – and close to all our children and families.

Don is pre-deceased by his parents, first wife, Mary, a brother, Klennes and his wife Shirley, and sister-in-law Maxine. He is survived by his loving wife, Kay, and children: Nancy (Joe) McRae and Kenna and Ellie; son Brian; son Scott (Teri) and Bennett and Will; Laura (Brian) Kranz and Ilah Kay and Jax Donald. He is also survived by brothers, Vernon of New Hope, MN and Clair (Pat) Anderson of Hawley, MN as well as numerous nieces, nephews, cousins and extended family. He is remembered as being humble about his accomplishments and being kind to all.

Services will be held at Rollag Lutheran Church on Saturday, March 16 at 11:00 a.m. with reviewal an hour before at the church. Visitation will be held at Dobmeier Funeral Home in Barnesville the evening before, March 15 from 5 – 8 with a prayer service and time of sharing at 7:00 p.m. Memorials are preferred to Luther Theological Seminary in St. Paul or Lutheran Social Service or Donor’s choice.