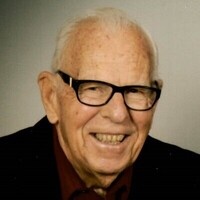 Visitation will be held from 5-8 PM, Friday, July 17, at Dobmeier Funeral Home in Barnesville, MN.

Donald John Dobmeier was born on February 12, 1928 to John George and Mildred (Ripple) Dobmeier in Park River, ND where he attended school and grew to manhood. At the age of 16, the funeral director in Park River asked Don to take ambulance calls for the funeral home. This eventually turned into helping out in the funeral home, and Don found his calling. Don graduated from Walsh County High School, Park River, in 1946. That same year Don enlisted in the U.S. Navy where he served as a Pharmacist Mate; today's hospital corpsman. Don was stationed at the Naval Air Station in Jacksonville, Florida where he worked with aviators and their oxygen needs. He was honorably discharged in 1948. He returned home where he worked for the Norman Funeral Home of Grand Forks, ND and began his college career at the University of North Dakota. It was there he met Margaret in a speech and debate class. He later transferred to the University of Minnesota where he completed his degree in Mortuary Science in 1951.

On June 23, 1951, he was united in marriage to Margaret Ardene DeGagne in the Sacred Heart Catholic Church in East Grand Forks, MN. The couple made their home in LaMoure, ND where he worked for the Groth Funeral Home and Hardware Store for seven years. They later owned and operated their own funeral home in LaMoure, ND.

In 1958, they moved to Barnesville, MN where they purchased the Collins Funeral Home, later to be named the Dobmeier Funeral Home. In 1960, Don's mother, Mildred, joined them in Barnesville where they purchased the Ben Franklin Variety Store in Barnesville. Mildred, Margaret, and Don owned and operated the store until 1978. Don and Margaret continued to own and operate the Funeral Home until 1988, when they retired and sold the funeral home to their son, John. They moved to their home on Lake Lizzie in rural Pelican Rapids, MN and wintered at South Padre Island, TX. They later wintered in Brownsville, TX. In 2001, they moved back into Barnesville where they lived until the time of Margaret's death. For many years, Don summered in Detroit Lakes, MN and continued wintering in Brownsville, TX.

Don epitomized funeral service and his compassion and humor comforted thousands of grieving families through the years. Don was involved in numerous civic groups and organizations including: The Barnesville American Legion Post 153, the Barnesville Lions Club, and The Barnesville Chamber of Commerce. He was also a member of the Assumption Catholic Church of Barnesville and the Knights of Columbus. Don was a very active member of the Minnesota Funeral Directors Association, serving as the District 9 director for many years, and the National Funeral Directors Association.

Don was preceded in death by his wife Margaret in 2002, one grandson Peter Dobmeier, and one sister Shirley Owen.