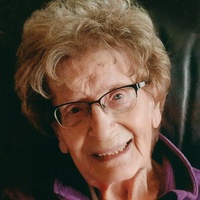 Dorothy Margareth Hecker, age 91, of Moorhead, MN, passed away peacefully at home surrounded by family on Sunday, July 25. She was born in Winner, MN, on November 26, 1929, to Christian and Elsie (Fischer) Hecker. Dorothy was raised in the Warroad area and attended a country school prior to Roseau High School.

She moved to Fargo in her late teens and did accounting for a local jeweler. Dorothy and the love of her life, Lowell Seefeldt, were united in marriage on February 1, 1950, in Barnesville. After living in Moorhead for a few years, they settled in Barnesville to raise their family. Dorothy continued doing accounting and taxes for many years there. She also worked at Smith's Department Store and Willow Creek Golf Course.

Dorothy was very active in Barnesville. As a member of St. James United Church of Christ, she served several years as treasurer of the Women's Guild. She was a member of Circle and helped with the Rugs and Quilts group. For many years, she was an Election Judge and also volunteered with Helpers. Dorothy was a member of the VFW and Legion Auxiliaries. She belonged to the local golf and bowling leagues. Dorothy loved gardening and was very well known for the beautiful flowers that adorned their home.

Dorothy was preceded in death by her husband, Lowell and son, Jeff. Also, four brothers, Herb, Bob, Bruno and Albert; one sister, Gertie; two half-brothers, Walter and Bill; and one half-sister, Pauline.

Visitation begins at 9:00 am with her funeral following at 11:00 am, on Friday, July 30, at St. James United Church of Christ in Barnesville, with Reverend Jim Wilson officiating. Burial will be at Rosemound Cemetery in Barnesville.