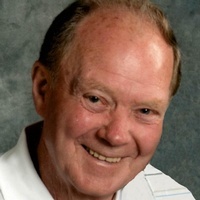 Duane Arlen Branden was born on May 11, 1932 to Carl and Lizzie (Danielson) Branden in Audubon, MN.  He grew up in Audubon where he attended school and graduated in 1950.  During high school, he cut ice from Detroit Lake and loaded onto rail cars.  Following school, Duane joined the US Air Force and served his country from 1952 to 1956.  He was an MP stationed in Hawaii for a long time.

In February of 1959, Duane married Connie Deborah Homme in Detroit Lakes, MN.  They raised their family in several places throughout his life including Houston, Texas, Bismarck, ND, Dilworth, MN, Audubon, and Barnesville, MN.

He was a member of the VFW, The 40 et 8, the American Legion and served on the 7th District American Legion.  He enjoyed playing baseball during his lifetime and was a big fan.  Duane’s hobbies included gardening, fishing, and hunting.  He was particular about having a nice lawn and spent countless hours in his garden.  He enjoyed his routine and meeting up with the gang at the Pool Hall.  He and Connie enjoyed dancing together.  Duane also made some tasty country style ribs.

Duane was preceded in death by his wife Connie in 2011; four brothers: Larry, Dean, Marlyn, and Lamoine Branden and his parents. Duane's Memorial Folder
To order memorial trees or send flowers to the family in memory of Duane Branden, please visit our flower store.