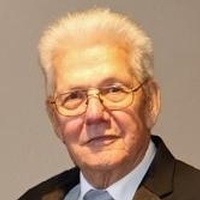 Visitation will be Tuesday, March 19th at Dobmeier Funeral Home from 5 to 7 PM with a Prayer Service at 7:00 PM and will continue one hour prior to the Mass on Wednesday.

Edward “Duke” Joseph Kava, Sr. was born on March 10, 1933 to Joseph and Klotylda (Borowiak) Kava. He attended rural schools, Assumption Catholic School and Barnesville High School, graduating in 1951. He was senior class president. He enlisted in the U.S. Army and served at Dugway Proving Grounds, Utah from 1953 to 1955. He then came home and worked in several different fields before becoming a heavy equipment operator, which he did for over 40 years.

Duke was united in marriage to Nancy Lynch on October 14, 1960 at Assumption Catholic Church. They lived in the Barnesville area where they raised their family.

Duke was a member of Assumption Catholic Church. He was an honorary life member of the Knights of Columbus, a member of the American Legion Post #153; where he served as Post Commander, a Color Guard member and was well known for making the Legion’s Saturday night hashbrowns. Duke and Nancy spent many years at Cross Point Resort near Pelican Rapids, MN, making friends that lasted a lifetime. He enjoyed hunting, fishing, gardening and spending time with family and friends.

He was preceded in death by his parents; son, Chuck; 4 brothers: Steve, Matt, Lawrence and John; and 6 sisters: Bernice, Frances, Josephine, Mary, Cecilia and Janet.

In lieu of flowers please consider a donation to Assumption Church Stained Glass Restoration Window Fund in memory of Duke.