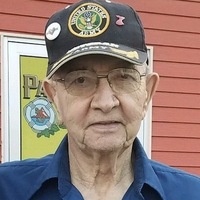 Edward Raw, 76, of Pelican Rapids, MN died on Monday, October 12, 2020 in the Perham Living Nursing Home in Perham under the care of Hospice of the Red River Valley.

Visitation will be from 5-7 PM, on Sunday, at Dobmeier Funeral Home in Barnesville.

Edward Leander Raw was born on April 9, 1944, on the family farm near Rothsay to Melvin and Leona (Lindholm) Raw. He attended country school and Rothsay High School. He served his country in the US Army during the Vietnam Era. After returning home from the service he started a family in Brainerd, MN area where he worked as a welder. They moved back to the Rothsay area and Ed worked at the Good Samaritan Nursing Home in Barnesville as a maintenance man. He then moved to Indianapolis, IN and lived for about nine years. During this time, he was active in the Foreign Exchange Program with his ability to speak Norwegian. He moved back to Minnesota and eventually bought a home in Pelican Rapids. He worked for many years in maintenance at the West Central Turkey Plant. He retired in 2006.

Ed was a handy carpenter. After retirement, he made many bird houses and loved to watch the birds. Ed loved the outdoors and he was an avid hunter, but his passion was fishing. Edward's Memorial Folder
To order memorial trees or send flowers to the family in memory of Edward Raw, please visit our flower store.