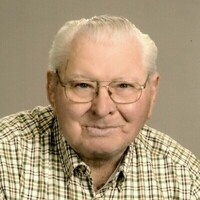 RESCHEDULED BECAUSE OF THE STORM:  FUNERAL SERVICES WILL BE SATURDAY (December 26, 2020) AT 11:00 AM.  at Assumption Catholic Church, with Father Todd Arends presiding. Burial will be at St. Mary’s Catholic Cemetery, Barnesville. The funeral service will be available via the funeral home website live stream and recorded.

Visitation will continue one hour prior to the funeral at the church on Saturday.

Edward Joseph Stetz was born on July 7, 1931, to John and Helen (McDunn) Stetz in Wilkin County, MN. He grew up on the family farm in Atherton Township, outside of Barnesville. He attended school in Barnesville. As a young boy, he stayed at home to help his dad on the farm. He entered the US Army in 1953, serving his country for six months. Edward was honorably discharged when his father became ill, he then returned home to help on the farm.

Edward married the love of his life Margaret Nicklay on April 4, 1959, at Assumption Catholic Church in Barnesville. The couple made their home and farmed in Wilkin County near Barnesville. Throughout his life they raised dairy, grains and hay. In his later years he loved watching birds through his window, drinking coffee, and playing solitaire. Sunday morning church and breakfast at the Eagle Cafe was a big part of his routine. He also enjoyed being surrounded by family, grandchildren, and the morning coffee with Wally, Mona, and Dennis. He topped off the day by taking the ranger around the farm, feeding the chickens and cats, and gathering the eggs.

Edward is preceded in death by his wife Margaret in 1994, his parents, three brothers, infant John, Adrian and Wally.