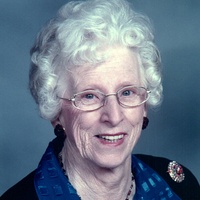 Visitation will be from 4-7 on Monday, April 12, at Dobmeier Funeral Home in Barnesville, MN, and one hour prior to the service at the church.

Erna Ruth Ludemann was born on February 18, 1926, to John and Anna (Lohse) Ludemann in Sabin, MN. She was 9th of 13 children. She became a child of God through infant baptism at Trinity Lutheran Church in Sabin and was later confirmed at the same church.  She grew up in several places including, Sabin, Baker, Cormorant and Barnesville and attended country school and Barnesville High School.

On June 14, 1944, Erna was united in marriage to Clifford Bang Sr. in the home of her parents in Barnesville. They made their home on the Bang Family Farm near Rollag where they raised their five children.

She moved into Barnesville in February of 2008, and later became a resident at ValleyCare and Rehab in 2015. She enjoyed embroidery and crocheting. She will be remembered as a hard-working woman with a quick wit and a great belly laugh. She loved playing cards, bingo, and visiting the casino. Many will remember Erna for her famous fried chicken, delicious donuts, and canned chicken.  She taught her family the importance of caring for extended family and always had room for more at the dinner table. She was proud of her German heritage.

She was preceded in death by her husband, Cliff in 1988; her parents; and 12 siblings: Martin, Roland, Robert, Joe, Kenneth, Walter, Willie, George, Herta, Elfrieda, Esther, and Elsie.