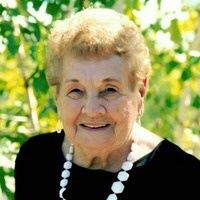 Mass of Christian Burial will be 11:00 AM, Wednesday, October 7, 2020, at Assumption Catholic Church in Barnesville presided by Father Todd Arends. Burial will follow at St. Mary's Cemetery, Barnesville.

Visitation will be held for one hour prior to the funeral service at the church on Wednesday.

Esther Marie Maier was born on December 8, 1924, to Daniel and Katherina (Kasauka) Maier near Mound City, South Dakota. She was the youngest of five brothers and six sisters. At the age of 17, she moved to Fargo and worked at Armor Packing Plant in West Fargo for several years.

In 1945, she married Frank Kara in Barnesville, MN at the Assumption Catholic Church. They made their home on a farm near Wolverton, MN and had five sons: Anthony, Curtis, Timothy, Frank Jr, and Jeffrey. Esther and Frank farmed near Wolverton, MN until 1967. They moved into Barnesville and went to work at the school. They then went to work for West Central Turkey Plant in Pelican Rapids for 25 years, retiring in 1992. The lived on Lake Lizzie for many years. Following Frank's death in 1994, Esther moved to Barnesville.

She was preceded in death by her husband Frank, son Tony Kara, daughter-in-law Bev Kara, and 11 siblings.

Online memories and condolences may be shared at www.DobmeierFuneralHome.com Esther's Memorial Folder
To order memorial trees or send flowers to the family in memory of Esther Kara, please visit our flower store.