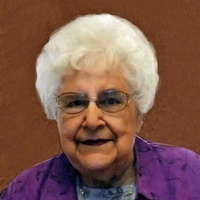 Eunice Helen Christen, 97, of Barnesville passed away peacefully on Monday, May 14, 2018 at Eventide Nursing Home in Fargo, ND.
Funeral Services will be 11:00 AM, Friday, May 18, 2018 at St. John’s Lutheran Church with Rev. Tom Eaves officiating.  Burial will follow at City Cemetery, Barnesville.

Visitation will be Thursday, May 17, 5-8 PM, at Dobmeier Funeral Home in Barnesville, with a Prayer Service at 7:00 PM.

Eunice was born on February 28, 1921 on the family farm, rural Barnesville, to Otto and Amanda (Buth) Brand. She was baptized and confirmed at Christ Lutheran Church, Mitchell Township, rural Wolverton, MN. She received her education at Wilkin County District 37 country school. As a young woman, Eunice helped her family with household and farm chores.


Eunice met Waldemar Christen of Perham, MN while he was working on a neighboring farm. They were married at Christ Lutheran Church on March 31, 1950. Waldemar and Eunice were almost late for the wedding because of rain, sleet and snow that was making the country roads nearly impassable as they had to travel to Wahpeton, ND to pick up the wedding flowers.

Since Waldemar was on the road doing construction work, Eunice took care of everything at home. She was a wonderful cook, kept a huge garden, harvesting and canning the vegetables every year. She loved to sew and made clothes for herself and her three girls.

Eunice and Waldemar liked to spend time visiting family and friends with their travel trailer. They owned a cabin on Pelican Lake for several years, where they like to fish and entertain family.

After Waldemar passed away, Eunice declared she did not like Minnesota winters anymore! She spent 20 winters in Apache Junction, AZ, enjoying the sunshine, spending time with friends, playing cards, bingo and dominoes. Eunice liked to crochet, making many, many doilies and afghans. She was also known for her beadwork and macramé skills.

Eunice was a member of St. John’s Lutheran Church and was active in the L.W.M.L. Over the years, she taught Sunday school and Bible school. She was a Campfire leader and a member of the “Meet Your Neighbor” homemakers. She was active in the auxiliaries of the American Legion and VFW. She enjoyed playing cards at the Senior Citizen Center in Barnesville.

She was preceded in death by her parents; her husband Waldemar; a daughter Linda; son-in-law Marshall Christensen, brother and sister-in-law Reuben and Kathleen Brand; and a nephew David Brand.

The family would like to say a special “Thank You” to the staff on 2-West at Eventide, Fargo for the excellent care they gave to Eunice.

Eunice's Memorial Folder
To order memorial trees or send flowers to the family in memory of Eunice Christen, please visit our flower store.