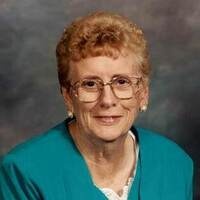 Family funeral service will be held 11:00 AM, Saturday, October 24, 2020 at St. James United Church of Christ in Barnesville with Rev. Frank Picard officiating.  Burial will follow in City Cemetery in Barnesville, MN.

Evelyn was united in marriage to Edward “Tuke” Lewis on July 12, 1946 in Sisseton, SD.  They made their home in Barnesville where Evelyn raised her family.  She was a hard worker on the farm, raising chickens, growing an enormous vegetable garden, and canning the produce for the family to eat.  In the fall she would work sorting potatoes and she also worked at Sis and Mar’s Café for a few years.

Family was first and foremost for Evelyn.  She looked out for their needs and was always keeping a watchful eye on them.  She enjoyed her friends and playing cards at the senior citizen center.  She was an avid Minnesota Twins fan.

Evelyn experienced the death of several loved ones throughout her life including her husband Edward, three sons: Bruce, Keith, and Roger, her parents, a sister Marion Haick, and brother Harold Johnson.