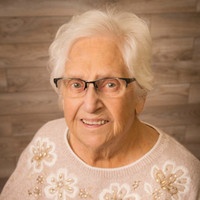 Visitation will be 5-8 PM, Thursday, January 2, 2020, at Dobmeier Funeral Home in Barnesville with a Prayer Service at 7:00 PM. Visitation will also continue for one hour prior to the Mass on Friday.

Gene Avis was born on July 22, 1925, to Frederick Scherf and Gena Hoven Scherf (Fetting) in Downer, MN. She grew up in Downer and Barnesville and attended school in Barnesville, graduating in 1943. As a young woman she moved to Minneapolis and worked at Western Union. She later lived in California.

She came home to Minnesota to visit in 1946, it was then she met, and later married, Albert John Bolgrean on June 4, 1947. They made their first home in the basement of the Assumption Church in Barnesville. She and Albert owned and operated a restaurant on Front Street in Barnesville called Bolgrean's Restaurant. She also cooked for her seven brothers-in-law and ironed their white shirts. To this union four children were born: David, Gloria, Dan, and Carol. She was a stay at home mom for many years. Later in life, she worked at Lee's SuperValu and the Post Office in Barnesville. Gene retired from the Post Office in 1987.

Gene will be remembered for all of her cooking and baking. She enjoyed winters in Arizona for many years. In the summer, time at the lake with family was special to her. She also liked to go to the casino and play bingo. She was a member of Assumption Catholic Church, Ladies Aid, the American Legion Auxiliary, and a life member of VFW Auxiliary.

Gene was preceded in death by her husband, Albert in 1983; son David, in 2006; her parents; and two brothers: Curtis and Leslie Scherf. Gene's Memorial Folder
To order memorial trees or send flowers to the family in memory of Gene A. Bolgrean, please visit our flower store.