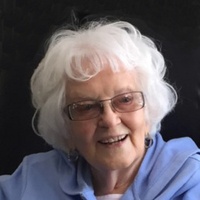 Geraldine Alvina Kuhn was born on March 21, 1918 in Fargo, ND to Frank Edward and Clara Mathilda (Berg) Kuhn. As a young child, she grew up in Moorhead, MN until age 8, when the family moved to Minneapolis until she was 16 years old. During the summers, Geraldine would spend time visiting her grandparents in Barnesville. When Gerri was a junior in high school her family moved to Barnesville. Her family had a small restaurant in a railroad coach car downtown Barnesville. She graduated from Barnesville High School in 1936.

Gerri was crowned the very first Miss Barnesville in 1937. Throughout Gerri's lifetime, she represented Barnesville with class and dignity. On a whim, May 11, 1941, she and Vernon Seefeldt woke the minister at 6 AM because they wanted to be married. He arose, married them, and another couple at the same time and the family served breakfast for them. They took a one day honeymoon to Bemidji, MN and hurried back to Barnesville because they needed to work the next day. They spent the next 68 years together until Vernon's death.

Vernon entered the US Army, and Gerri stayed by his side following him across the states until he was stationed overseas. Vernon returned to Barnesville where they made their home and their son Dana was born in 1946. During this time, Gerri and her friend Faye operated the teen hang out called the Old Maids, an ice cream shop and hamburger joint. This business moved down the block and became Emery's Cafe; and Gerri worked with her good friend Faye. In 1955, their daughter Myla was born. In the early 1970's, Gerri caught the chance to work in the Barnesville Library. This was a dream of hers, because growing up she lived a block and a half from a library in south Minneapolis, and this was one place her mother would let them go. She always loved being in the library and looking through books. She continued working there until retiring. Vernon died in 2009. In 2011, she moved to Eventide independent living apartments where she has resided until her death. She enjoyed the social activities at Eventide including bible study, coffee time, front porch parties, and bonfires. Gerri also kept tabs on the Barnesville residents who moved into Eventide and visited with them.

Throughout her lifetime, Gerri was active in many community activities: including clerking at the Clay County Fair, working as an election judge for many years. She was a member of St. James United Church of Christ where she taught Sunday School and was active in the women's guild. She was also a lifetime member of the VFW Auxiliary and American Legion Auxiliary. One of her favorite memories was campaigning for the Easter Seals and she got a chance to meet the television stars Ozzie and Harriet Nelson.

Gerri was a very loving and supportive wife, mother, grandmother and great grandmother; attending every activity that she could. She loved her family and was always full of praise. There is no way to put in words her wholesome, good natured, and positive attitude she had toward people and about life. She carried herself proudly and treated all others with dignity.

She was preceded in death by her husband, Vernon; two sisters: Lillian Sillerud and Irene Thrane; and her parents, Frank and Clara Kuhn.

Visitation was held from 4-8 PM, Thursday, June 18, 2020 at Dobmeier Funeral Home in Barnesville. People are asked to follow the social distancing guidelines and mask wearing requirements when gathering.

Private funeral services were held at 11:00 AM on Friday.

A public graveside services was held at 12 PM, Friday, June 19, 2020 at Rosemound Cemetery in Barnesville. Geraldine's Memorial Folder
To order memorial trees or send flowers to the family in memory of Geraldine "Gerri" A. Seefeldt, please visit our flower store.