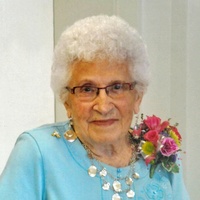 Funeral services will be 2:00 PM, Sunday, March 1, 2020, at the Baker Downer Westminster Presbyterian Church in Baker, MN with Pastor Lorelee Benz presiding. Burial will be at a later date in Elmwood Cemetery, Sabin, MN.

Visitation will be from 4-6 PM, Saturday, February 29, 2020, at the church with a Prayer Service at 6:00 PM. Visitation will continue for one hour prior to the service on Sunday.

Gloria Mae Maesse was born on August 9, 1924, to Ernest and Mabel (McCarl) Maesse in Fargo, ND. She grew up on a farm near Baker, MN where she attended country school, and then graduated from Barnesville High School in 1941.

She married Milo W. Schenck on February 8, 1942, in the Baker Presbyterian Church. The couple made their home and farmed near Baker on the home place. In November of 1946, they moved to another farm near Baker. Gloria helped on the farm with the animals, fields, potato picking, sorting, and driving until their retirement. She was a supportive mom who was involved in many of her children’s activities including: music, 4-H, church, and school. Music was one of her passions, she sang and traveled with the F-M Sweet Adeline’s for over 40 years. She avidly followed the Minnesota Vikings and Twins, as well as all of the kids and grandkids activities and sporting events.She was a lifelong active member of the Baker Presbyterian Church, including the Women’s Group, Choir, and Quilters. For many years Gloria would demonstrate products at the Moorhead Hornbachers.

Gloria was preceded in death by her husband Milo, in 1998; her parents, Ernest and Mabel Maess; four brothers: Donald, Wesley, Rodney, and Kenneth Maesse, and several brothers and sisters-in-law. Gloria's Memorial Folder
To order memorial trees or send flowers to the family in memory of Gloria Schenck, please visit our flower store.