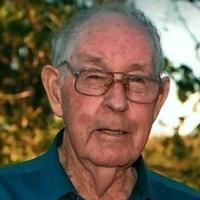 Gordon spent his whole life farming in the Barnesville area, beginning at age thirteen when he and his younger brother took over for their ailing dad, both graduating from high school as teenagers.

Gordon’s love for traveling took his family all over the western states.  His favorite spot was on the Beartooth Highway, up from Red Lodge, Montana.  There he introduced his kids and their friends to the beauty of God’s creation.  In the ‘70’s, Gordon and Maxine made several camping trips with the Parish Luther League.  He also loved fishing and deer hunting with his children, and listening to Eddie Arnold and Lawrence Welk.

His passion was wild flowers; giving talks at Perham’s Horticulture Events.  His wild flowers, and yard flowers were spectacular, nary a weed in sight.

Gordon was a quiet, thoughtful man.  He has left his children a rare kind of gentleness, family unity, and a hard work ethic.  He was loved by all.

Gordon Shulstad, age 91, died with his family gathered at his side on Friday, April 5, 2019 at ValleyCare and Rehab in Barnesville, MN.

Visitation will be from 5-8 PM, Tuesday, April 9, 2019 at Dobmeier Funeral Home in Barnesville, MN with a prayer service at 7:00 PM.  Visitation will also be for one hour prior to the funeral service at the church on Wednesday.

Funeral services will be 11:00 AM, Wednesday, April 10, 2019 at Rollag Lutheran Church with Rev. Jim Greene officiating.  Burial will be in Gran Lutheran Cemetery, rural Rollag.

In lieu of flowers memorials may be designated to Gran Lutheran Church Siding Fund or your favorite charity.

To order memorial trees or send flowers to the family in memory of Gordon Charles Shulstad, please visit our flower store.