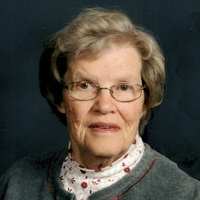 Harriet Maureen Bekkerus was born on January 5, 1929, in Pelican Rapids, MN, the daughter of Albert C. and Hilda T. (Skogen) Bekkerus. The family was of Norwegian heritage. She attended District 47 Country School near her home.

She was good at baking. She also liked to sew and made baby quilts for each of the grandchildren.

Harriet was preceded in death by her husband Willis in 2011; son Keith; her parents, Albert and Hilda; and sisters, Claudia Gilbertson and Arlene Gilbertson.

Harriet died one day shy of her 93rd birthday, on Tuesday, January 4, 2022, at the Pelican Valley Health Center in Pelican Rapids, MN.

A Celebration of Life will be held on Saturday, April 30th at 11:00 AM in Dobmeier Funeral Home in Barnesville, MN with Rev. Kevin Skarrett officiating.

Burial was held at City Cemetery, in Barnesville, MN.