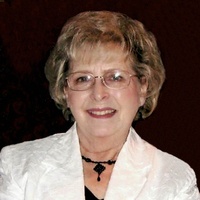 Jackie Peet, age 86, of Fargo, passed away peacefully following a stroke in her home at Edgewood Vista in Fargo, ND on Saturday, December 12, 2020 under the care of Hospice of the Red River Valley with her loving family at her side.

Memorial Services for Jackie Peet are 1:00 pm, Saturday, August 21, 2021 at Our Savior's Lutheran Church in Barnesville with Rev. Chris Leach officiating.  Burial of cremains will be in City Cemetery.

Due to covid a Private Family service was held on Friday, December 18 at Dobmeier Funeral Home in Barnesville, MN with Rev. Matt Valan officiating. A community Celebration of Jackie's life will be held in the summer of 2021.

Jacquelyn Marie Hegge was born on August 11, 1934 to Russell Joseph and Clarina (Rindahl) Hegge in Rustad, MN. She completed her elementary education in Baker, MN and graduated from Barnesville High School in 1952. She made many lifelong friends at Barnesville High.

Jackie married Howard Peet on June 20, 1953 in Long Beach, California where Howie was stationed in the US Navy. After the Korean War they spent a few years living in St. Paul, Minnesota before moving to the family farm near Wolverton, Minnesota.

Howie and Jackie were blessed with two children, Terry and Pam. She raised her children with equal doses of love and re-direction.

During her children's adolescence Jackie was active in many things including volunteering at their schools, teaching Sunday school at Deerhorn Presbyterian Church and Our Savior's Lutheran church in Barnesville. She was her children's and later her grandchildren's biggest cheerleader and supporter.

Jackie was noted for great generosity with her time not only working for her children, grandchildren and their activities but working for the Barnesville community including being a correspondent for the local paper, an active PTA member and a member of many other clubs and organizations. Jackie was a member of the Baker/Sabin Republican Party. For this work she received commendations from two former Minnesota governors. She also spent her time playing golf and oil painting. She was an avid reader and fantastic cook.

In 1979 Jackie and Howie moved to Fargo. During the next 37 years, they would reside in California and Arizona, returning back to Fargo in 2017.

Jackie was immensely proud of her family and leaves behind nothing but beautiful memories. This loving wife, mother, grandmother and soon -to-be great grandmother will be sorely missed.