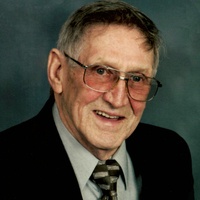 Mass of Christian Burial will be 11:00 AM, Thursday, October 15, 2020, at Assumption Catholic Church in Barnesville with Father Gary LaMoine presiding. Burial will follow in St. Mary's Cemetery, Barnesville.

Visitation will be from 5-8 PM, Wednesday, October 14, 2020, at Dobmeier Funeral Home in Barnesville. Visitation will continue for one hour prior to the Mass on Thursday.

James Mark Cox was born on October 7, 1930, in Jamestown, ND to Cyril Charleton and Rose Elizabeth (Balster) Cox. Jim grew up in Jamestown, ND. Beginning in 1950, Jim served his country in the US Navy. He served aboard the SS Albany during the Korean War and the Destroyer Taussig.

On June 25, 1952, Jim was united in marriage to Marjorie Grabeau in St. James Catholic Church in Jamestown. They started their family while living in Jamestown and Jim worked on the Northern Pacific Railroad as a brakeman-switchman. During these years, he began working for Cecil Shurbert in the floor covering business, which led to a lifelong career for Jim. In July of 1970, the family moved to Barnesville, MN. Jim was the installer for Martinson Furniture and later purchased the floor covering and installation business. He later worked for Fargo Linoleum for many more years. He enjoyed his work and was a hard worker.

Jim was a member of Assumption Catholic Church, the Knights of Columbus, the American Legion, the VFW, and the NRA. He was a Boy Scout Leader and volunteered on the Barnesville Ambulance as an EMT for many years.