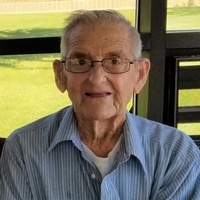 Mass of Christian Burial will be 11:00 AM, Saturday, January 5, 2019, at Assumption Catholic Church in Barnesville with Father Gary LaMoine presiding.  Burial will follow in St. Mary’s Catholic Cemetery, Barnesville.

Visitation will be held 5-8 PM, Friday, January 4, 2019, at Dobmeier Funeral Home in Barnesville with a Prayer Service at 7:00 PM.  Visitation will continue for one hour prior to the service at the church.

James Henry Ferris was born on April 27, 1929 to Alfred and Elva (Singer) Ferris.  Jim grew up near Baker, MN attending Baker Country School while helping on the family farm.  Jim married Joyce Wilkinson on November 9, 1950 at Assumption Catholic Church in Barnesville.  Jim was drafted into the Army in 1951.  Jim and Joyce lived in Arkansas and Texas while he was in basic training.  Jim served in Korea during the Korean War and was honorably discharged in March 1953.  In 1954, Jim and Joyce moved to the Ferris family farm where they raised their two sons.  In May of 2018, Jim moved to the Fergus Falls Veterans Home where he spent the remainder of his days.

Jim enjoyed spending time with family and friends, especially the time spent with his six grandchildren and four great grandchildren, and at holiday gatherings.  Jim could be counted on to provide “Grandpa Bars” for anyone visiting; always making sure to have a fresh batch when his grandkids were around.  He was a lifetime member of the Assumption Catholic Church and was involved with delivering Meals on Wheels.  He was a member of the Moorhead VFW.

Jim enjoyed playing baseball and slow pitch softball.  He was a sports fan and enjoyed attending sporting events or watching them on television.  To name a few of his favorites: Barnesville Trojans, Minnesota Twins, Minnesota Vikings, NDSU Bison, and the Fargo Redhawks.

Jim worked as a heavy equipment operator starting at age 16 for Kost Brothers in Downer; later working and retiring from Henry Brothers Excavating in 1992.  In addition to excavation, Jim also farmed the home acres.  Upon retiring from farming, Jim turned his attention from the field to his lawn.  If he notices one blade of grass needed mowing, the whole yard was going to get mowed.  He could always be found tinkering in his shed; if it was broke, he fixed it, and if was fixed, he fixed it again.