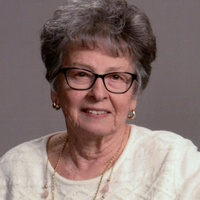 Janice Cook, age 84, died peacefully with her family at her side on Thursday, June 24, 2021, at her home in Moorhead.

Visitation will be held on Wednesday, June 30, 2021, at Dobmeier Funeral Home in Barnesville with a Prayer Service at 7:00 PM. Visitation will then continue one hour prior to Mass on Thursday at the church.

Janice Marie (Gehrig) Cook was born on January 20, 1937, to Anton and Theresa (Buth) Gehrig at their farm home in Barnesville, MN. Janice attended school in Barnesville until the age of 16. She went to work at this time in Fargo, ND at the Manchester Biscuit Company. She later worked for Silver Line Boats in Moorhead, MN. After that she started her own business offering interior cleaning of homes.

In 1956, while working in Moorhead, Janice met the love of her life, Kenneth Cook. Ken and Janice were married April 27, 1957, at Assumption Catholic Church, Barnesville, MN. They moved to Moorhead in 1959, where they raised their 4 children. They bought the Gehrig family farm in 1966, and farmed the land until 1987. In 1992, they moved to Downer, MN, where they lived for many years before returning to Moorhead. During their marriage they enjoyed many summers at their lake home, traveling in their motorhome, and spending many winters at their home in Mesa, AZ.

Some of Janice's favorite past times were, spending time in the garden, being around her children and grandchildren and great-grandchildren, country drives, looking at crops, wildlife and watching sunsets from her porch. She also enjoyed the evening gatherings with her friends at her apartment complex.

Ken passed away in February 2017. A couple years later while attending church, Janice met up with close friend Jerry Ferris. Janice and Jerry enjoyed time together playing board games, trips to the farm, and the most recent hobby, gopher trapping. They also enjoyed watching the sunsets and wildlife from her home in Moorhead. Jerry brought back the smile on Janice's face her family loved to see.

Janice was greeted at Heaven's gate, by her husband, Ken; her parents; brothers, Donald and Loren (Butch); her sisters, Dee Hibbert, Marcella Violette and Mildred Bolgrean.