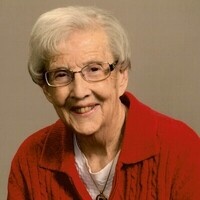 Visitation will be Friday, January 28, from 5-8 PM, at Dobmeier Funeral Home in Barnesville, MN with a Prayer Service at 7:00 PM. Visitation will continue for one hour prior to Mass.

Jeanette Irene Dickelman was born on May 13, 1933, to Alvin & Edna Jane "Jennie" (Cook) Dickelman at home in rural Sabin, Alliance Township, Clay County, MN where she was raised and grew to womanhood.

On August 26th, 1953, Jeanette was united in marriage to John Lawrence Kava at Immaculate Conception Catholic Church in Fairbanks, Alaska where he was stationed in the Army.

They returned to rural Barnesville in the summer of 1954, where they raised six sons and two daughters, living there until 1987; when they purchased a rural home just two miles north of the home farm. Jeanette moved to Barnesville in 2014 and became a resident of VallyCare and Rehab in October of 2020, and the Golden Manor Assisted Living in February of 2021.

Being a farmer's wife, homemaker and raising eight children was just the beginning of her long list of titles. She was employed as a teacher's aide at Atkinson Elementary, was a Real Estate Agent, and also an office administrator for a bankruptcy clerk, all in Barnesville.

Jeanette has been a faithful long-time member of Assumption Catholic Church in Barnesville. She was also an active member of the American Legion Auxiliary Unit #153 of Barnesville, in which she held many positions on the Local, District, Department and National levels. She was also a member of the VFW Auxiliary Post 4628. She was involved in 4-H as a youth and later assisting their children and serving as a leader with the Wilkin County Fair. The Kava's were also involved in the AFS program hosting a foreign student from Sweden, Roland Engstrom. Through the 4-H exchange summer program, they hosted Olav Hasle from Norway and Koji Tobashi from Japan. She enjoyed music, sewing, baking, and traveling; but nothing more than spending time with her children, grandchildren, and great-grandchildren. She kept lists of everything, and family history was very important to her.

She was preceded in death by her husband, John in April of 2016; infant twin son and daughter, Donald and Darlene; two great granddaughters: Madison and Sydney Cox; brother, Darryl Dickelman; sister, Virginia Hansen; and her parents.

In lieu of flowers memorials are suggested to the Minnesota Girls State. To order memorial trees or send flowers to the family in memory of Jeanette Irene Kava, please visit our flower store.