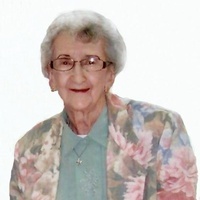 Mass of Christian Burial will be Monday, March 18, 2019 at 11:00 AM at Assumption Catholic Church, Barnesville, with Father Andrew Obel presiding. Burial will follow at St. Mary’s Catholic Cemetery, Barnesville.

Visitation will be Sunday, March 17th at Dobmeier Funeral Home from 5 to 8 PM with a Prayer Service at 7:00 PM and will continue one hour prior to the Mass on Monday.

JoAnn M. Gantzer was born on October 22, 1930 to Wilfred and Anna (Flieschacker) Gantzer in St. Paul, MN where she grew to womanhood.

After high school, she moved to Moorhead and worked at J.C. Penney Co. From there, she worked at the ASC Office, processing grain loans. She worked with Shirley Lura, sister of her future husband, Neil Barry. She met Neil and they were married March 29, 1951. They lived in Moorhead for a year, then moved to the family farm near Barnesville, where she resided until her death. She and Neil farmed until 1986 when they retired.

JoAnn was active in the Assumption Church, serving on the School Board, Pastoral Council, Guild President and Circle leader. She was also active in the American Legion Auxiliary, Post 153.

Surviving JoAnn are her children: Steven (Darcy) Barry and Mary Kay Barry all of Barnesville, Kevin Barry of St. Cloud, MN, and Kent (Janelle) Barry of Barnesville, and 8 grandchildren, 3 step-grandchildren and 7 great grandchildren. She is also survived by her brother-in-law, William Kent of Casselton, ND and sister-in-law, Mary Jane Gantzer of Minneapolis, MN, and many nieces and nephews.

Preceding JoAnn in death were her husband, Neil, a son Patrick, a daughter, Barbara, her parents and her siblings.