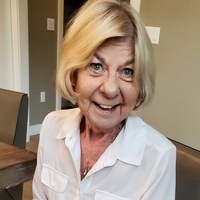 Joann Holland, 73, died on September 15, 2021 at her home surrounded by her loving family and with the care of Hospice of the Red River Valley.

Memorial Mass will be 11:00 AM, Tuesday, September 21, 2021 at Assumption Catholic Church in Barnesville, MN with Father Todd Arends presiding.

Visitation will be 5-8 PM, Monday, September 20, 2021 at Dobmeier Funeral Home in Barnesville with a Prayer Service at 7:00 PM. Visitation will continue for one hour prior to the service on Tuesday at the church.

Jo Ann Kodet was born on June 24, 1948 to Emil and Rosella (Bartes) Kodet in Redwood Falls, MN. She was baptized and confirmed in St. John's Catholic Church in Morton, MN. She attended school in Morton and graduated in 1966. She went on to attend the Minnesota School of Business in Minneapolis. During these years, she worked at the Foshay Tower in Minneapolis.

Throughout these years, she worked administration for Assumption Catholic Church, Holland Construction, Region 1 ESV in Moorhead, followed by working for the Catholic Schools Network in the FM area, and ended her career with PRACS in their accounting department.

Joann enjoyed her garden, puzzles, reading, and sewing. Her children and grandchildren were her first priority. She will be remembered for her green thumb, her cooking, canning and amazing teriyaki steak and potato salad. Over the years, Joann and Dave shared many adventures with their friends and family.

She was preceded in death by her parents, one sister Diane Klegstad, and an infant son.

Joann's Memorial Folder
To order memorial trees or send flowers to the family in memory of Joann Holland, please visit our flower store.