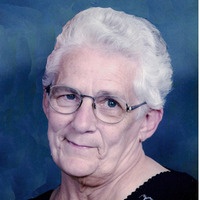 Joyce Gilbertson, 87, of Barnesville died on Sunday, August 22, 2021 at ValleyCare and Rehab in Barnesville, MN.

Funeral services will be 11:00 AM, Wednesday, August 25, 2021 at Our Saviors Lutheran Church in Barnesville, MN with Rev. Chris Leach officiating. Burial will follow in St. Mary's Cemetery, Barnesville.

Visitation is from 5-8 PM, Tuesday at Dobmeier Funeral Home in Barnesville with a Prayer Service at 7:00 PM and for one hour prior to the funeral service at the church.

Joyce Arlene Severson, daughter of Knute and Mary (Griffin) Severson, was born on March 15, 1934 in Barnesville, MN, the youngest of 13 children. She has been a lifetime resident of Barnesville. She attended school in Barnesville.

Joyce married Harvey Gilbertson on February 23, 1952, at Assumption Catholic Church in Barnesville. The couple made their home and farmed east of Barnesville. She was a true farmers wife. She could drive the tractors, milk the cows, throw hay bales, and cook for a crew. All in the meantime, raising a garden, canning, and cleaning. She was most proud of raising her five boys. Harvey and Joyce continued to operate the farm with cattle all those years, retiring from farming in 1984. They then turned their farm over to their son Ed.

Joyce was a member of Our Savior Lutheran Church, where she taught Sunday School for many years, and volunteered in the office for many years. She also would substitute in the Elementary School kitchen when needed. Joyce loved being a grandmother and great grandmother. She has resided at ValleyCare and Rehab for the past three years.