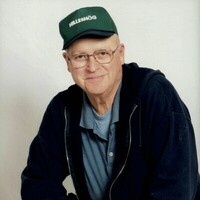 Kenneth Andrew Kolding was born on December 15, 1934, to Mathias (M.B.) Kolding and Alma (Kilen) Kolding, on the family farm near McCanna, North Dakota. Ken passed away, Thursday, September 16, 2021, at his home in Barnesville, MN with his family at his side. He was under the care of Hospice of the Red River Valley.

Ken attended country school in McCanna, then graduating from Larimore High School in 1952.

At age 17, he joined the United States Navy, stationed at Norfolk, VA, until his discharge in 1955. He then returned home to the family farm. Ken then worked as a truck driver in Fargo for a short while before beginning work at Fargo Meat Supply. In 1959, Ken started his career in law enforcement with the Moorhead Police Department where he worked eight years before joining the Clay County Sheriffs Department. He worked various positions within the Sheriffs Dept and retired as Lieutenant after serving 27 years with the county. He continued work with the county after retirement, working at the Clay County Courthouse as security and bailiff for a few years longer.

Ken was a long-time member of the St. James United Church of Christ in Barnesville. He was very active in the church, serving on many committees and boards. He was heavily involved in volunteer work in the county, so much so that he was distinguished as one of the Clay County Citizens of the Year for all his volunteering efforts. Ken was very active with the Barnesville Lions and in 2007-2008 he served as 5-M-11 District Governor. In the late 1970's he was an active member of the Fargo Moose Lodge and served as JR Governor and then Governor. Ken was also a member of the Barnesville American Legion Post #153.

Ken enjoyed driving through every car dealership that he passed, checking out the vehicles in the lot. He enjoyed traveling to visit his girls, family, and friends.

Ken was preceded in death by his parents; two brothers: Harold and Vernon Kolding.

Memorial services will be held at 10:30 AM, Saturday, September 25, 2021, at St. James United Church of Christ in Barnesville, MN. Burial of cremains will be 3:00 PM, Saturday at Elm Grove Cemetery, Larimore, ND.

Cards and Condolences for the family can be sent to: Dobmeier Funeral Home, % Ken Kolding Family, PO Box 235, Barnesville, MN 56514.