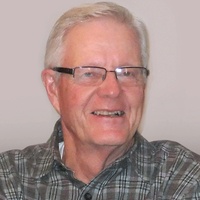 Kermit Dale Anderson was born on December 13, 1935, to Kenneth and Orpha (Johnson) Anderson in Barnesville, MN. He grew up on the family farm in rural Tansem Township south of Rollag, MN. He attended District 77 Country School and graduated from Hawley High School in 1952. Following graduation, he began working construction at the age of 16.

On January 21, 1961, Kermit married Violet Weerts at Salem Lutheran Church in Hitterdal, MN. They lived in an apartment in Hawley for five years before purchasing an 89-acre farmstead three miles north of Rollag, MN. The first of many significant changes to the home farm occurred in 1974 when Kermit oversaw the construction of a new house which he and Violet designed. That house has become the central hub in the lives of his children and grandchildren to the present day. The majority of Kermit's employment was with TF Powers Construction in Fargo, ND in the commercial construction business. Initially working as a carpenter, Kermit ultimately moved into the office in Fargo, serving as Vice President and General Superintendent until his retirement. Over the years, Kermit has directed work on numerous projects throughout the tri-state region including the Federal Courthouse in Fargo, St. Ansgar's Hospital in Moorhead, the Elks Club, the computer center at NDSU, the Armory, Hornbacher’s grocery, and various schools.

On the side, Kermit raised beef cattle, feeder calves, and horses on the family farm and harvested oats and alfalfa to support the livestock. He was an avid outdoorsman, enjoying annual deer hunting trips, ice fishing, snowmobiling, and had a keen eye for wildlife. He planted several large vegetable gardens each year where he spent countless spring and summer hours. He participated in a bowling league and would frequently attack a golf course. Kermit's passion was as a craftsman, using his woodworking skills to create furniture and various home decor. He teamed up with Violet who was meticulous with wood stain and finish, to create beautiful treasures for his family. His projects included intricate music boxes, inlaid keepsake boxes, jewelry armoires, children's name puzzles, clocks, shelves, beds, desks, deacon benches, and built-in cabinetry. Each grandchild received a large chest of drawers handcrafted by their artisan grandfather. He was a member of Rollag Lutheran Church and had served as treasurer and on the church council.

Although Kermit was a huge fan of the MN Twins and MN Vikings, his children and grandchildren were his greatest focus. Kermit and Violet didn't miss a concert or sporting event of their own children and later, they wore a trail from Rollag to Moorhead, Barnesville, and Rothsay attending the activities of their grandchildren. If there was a soccer, football, or basketball game, track meet, concert, musical, or recital that featured an Anderson or Brenden, Grandpa Kermit and Grandma Violet were sure to be in attendance.

Kermit was preceded in death by his parents, Kenneth and Orpha Anderson, granddaughter Erin Anderson, and sister Donna Griffin.

Memorial services will be 11:00 AM, Wednesday, July 27, 2022 at Rollag Lutheran Church with Rev. Jim Greene officiating.  Burial will follow in the Rollag Cemetery. Please grab your favorite lawn chair to bring with you; a picnic lunch will be served outside of the church following the service.

Visitation will be from 5-7 at Rollag Lutheran Church with a Prayer Service at 7:00 PM.

To order memorial trees or send flowers to the family in memory of Kermit Anderson, please visit our flower store.