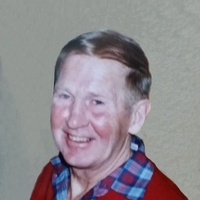 Larry Blomster, 79, died at his home under the care of LB Hospice in rural Rollag, MN on Thursday, September 13, 2018.

Visitation will be from 5-7 PM with a Prayer Service at 7:00 PM at Dobmeier Funeral Home in Barnesville, MN.

Larry Wayne Blomster was born on January 9, 1939 to Harold Carl and Doris Ione (Olson) Blomster in Maddock, ND.  He grew up in rural Baker, ND on a family farm.  He attended school in Baker and Maddock, ND.  He then attended Brown Institute in Minneapolis to learn the plastering trade.  He was the youngest journeyman plasterer in the Minneapolis area at that time.

He married Diane Britsch on December 17, 1960 in Harlow, ND.  In their early years of marriage, they lived in Richfield, MN.  In the late 1960’s they moved to near Barnesville and worked on a farm.  He worked at Fisch Lumber Yard and later at the Barnesville Elevator before buying a dairy farm near Rollag.  For many years, he and his wife milked cows and farmed the land until retiring from dairying in 2000.  After suffering a stroke, he continued farming for a few more years.  He also worked for Dunham Farms for some time.

After retirement, they enjoyed spending time in Mesa, AZ.  Throughout the years, they loved to dance and being with friends.  Drives in the convertible and ice fishing were a highlight.  They enjoyed four-wheeling with friends.  The first and foremost love was his kids and grandkids.  Larry had a great sense of humor and loved a good joke.  He couldn’t tell them very well, because he would start laughing before the punchline.

Larry was preceded in death by his parents and grandparents, and a brother Dennis Blomster.
Larry Blomster, 79, died at his home under the care of LB Hospice in rural Rollag, MN on Thursday, September 13, 2018.
To order memorial trees or send flowers to the family in memory of Larry W Blomster, please visit our flower store.