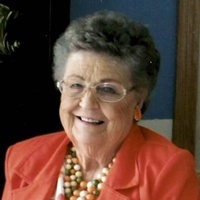 LaVonne Staska, 89, of Barnesville, MN, passed away at Rosewood on Broadway, Fargo, ND on Wednesday, November 14, 2018.

LaVonne Ramona Strand was born on February 10, 1929, in Abercrombie, ND, to Holbert and Dessa (Ault) Strand, the youngest of four children. She grew up in Moorhead, MN, and graduated from Moorhead High School in 1947. She married John G. Staska on June 16, 1949. They lived in Moorhead until moving in 1964 to Oakport Township. In 1974, they moved to rural Hawley and then in 2002 they moved to Barnesville.

LaVonne sewed beautifully and produced many lovely items from clothes to drapes. With Jack’s big garden in Barnesville, she canned a lot of produce and mowed a lot of grass. She was also an avid reader. She and Jack enjoyed many trips to England. LaVonne truly loved her morning friends, who met every day at the Eagle Café in Barnesville. When she had to quit the morning get togethers, there was a hole that would never be filled. She also loved “bling” and was always dressed nicely.

She was preceded in death by her husband Jack in 2002; her parents; two sisters Arlene Goolsby and Mildred Evans; brother Maurice Strand, and great grandson Jacob Bakken. LaVonne's Memorial Folder
To order memorial trees or send flowers to the family in memory of LaVonne Staska, please visit our flower store.