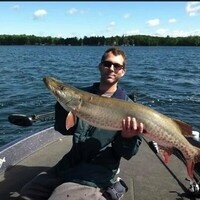 Lawrence Christopher Steele (Chris), 49 of Barnesville, MN passed away suddenly on December 28, 2020.  Private services will be held in Gladewater, TX.

Chris was born on July 8, 1971 to Jack Steele and Jan Greenwood in Longview, TX.  After graduating from Pine Tree High School in 1989, he received an associate’s degree from Kilgore College in Kilgore, TX.   In 1998, he moved to Minnesota and discovered his love for fishing, hunting and winter activities.  He was most proud of his two sons, Brennan and Dylan.  He was a huge Steelers fan and enjoyed watching football with his sons.  He worked for Fargo Glass and Paint for 10 years in their paint shop and was a talented carpenter.

To order memorial trees or send flowers to the family in memory of Lawrence Christopher Steele, please visit our flower store.