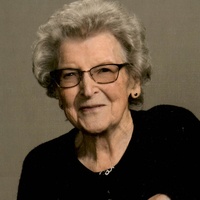 Lorraine Gehrig, 93, died on Saturday, February 13, 2021, at ValleyCare and Rehab in Barnesville, MN.

Visitation will be from 4-7 pm on Thursday at Dobmeier Funeral Home in Barnesville.

Lorraine Marie Thomson was born on March 20, 1927, to Theodore and Mary (Pesheck) Thomson on the family farm in rural Wolverton, MN. She was the baby of 10 children. She grew up in the Wolverton area and attended country school through the 8th grade. She was born and raised a strong Catholic. Following school, she helped out on the farm, especially with the cooking. As a young woman, she worked at an ice cream shop in Moorhead.

She met and married the love of her life Donald Gehrig on February 19, 1946. With the help of her dad, they began farming near Wolverton. This is where they started their family. In 1959, they moved to Barnesville and made their home until the time of her death. For most of her life, Lorraine was a mother and homemaker, but during her lifetime, she also had worked doing laundry at the Gabel Hotel and a dry cleaning business. She spent many hours in the gardens raising vegetables and flowers. An immaculate yard was a signature of hers; she spent time sweeping the sidewalks and picking the leaves by hand. She will be remembered for her baking and her homemade angel food cakes.

She was a faithful member of Assumption Catholic Church, working in Hildebrand Hall for all the church events. She was also a member of the Foresters and the St. Anne's Guild. At age 85, one of the highlights of her life was her first airplane ride and a trip to Cancun, Mexico.