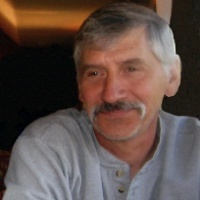 Memorial services will be 11:00 AM, Saturday, July 20, 2019 at Rollag Lutheran Church with Rev. Jim Greene officiating.  Burial will be in Rollag Cemetery.  Military honors will be provided by the Barnesville VFW and American Legion Honor Guard.

Visitation will be one hour prior to the funeral service at the church.

Lloyd Jorgen Hanson was born on June 20, 1955 to Marvin and Mary (Hemness) Hanson in Minneapolis, MN.  He was baptized and confirmed at Rollag Lutheran Church.  He grew up and attended school in Barnesville, MN graduating in 1973.  He then entered the US Army, serving his country from 1973-1978.  Basic training was in Kentucky and was stationed in Germany and Fort Knox.   Following his service, he moved back to Minnesota and attended tech school in Detroit Lakes.  During his younger years he worked in small engine repair and welding.  During this time, two sons were born to Lloyd, Jeremy and James.    He was very mechanical and repaired atv’s, boats, and snowmobiles for people from all around.  He would service these machines and offer storage during the off seasons.

Lloyd worked for the Clay County Highway Department, maintaining the hills and valleys of the Rollag area for the past 12 years.  He was united in marriage to Julie Amann on July 14, 2000.

Lloyd loved to spoil the grandchildren, especially with extra scoops of ice cream and four wheeler rides.  He also enjoyed hunting, four wheeling, and drinking Miller Lite.  He loved to roam the hills of Rollag visiting with the neighbors and friends.  He was often found tinkering in the shop.  The Tuesday Roadhouse burger night bunch was something he looked forward to.  He served on the Tansem Township Board.

Lloyd was preceded in death by his mother Mary Hanson.

Online memories and condolences may be shared at www.DobmeierFuneralHome.com